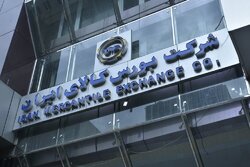 Over 7.297 million tons of commodities worth over $2 billion were traded at Iran Mercantile Exchange (IME) in the past Iranian calendar month (ended on January 20).

As reported by the IME Public Relations and International Affairs Department, the exchange sold on both domestic and export pits of its oil and petrochemical trading floor more than 1.529 million tons of commodities worth over $856 million.

Next was the metals and minerals trading floor with trades of 5.724 million tons of commodities valued at more than $1 billion.

On its agricultural trading floor the exchange saw offering of 50 kg of saffron strands.
It's worth noting that the IME also played host to trade of 43,899 tons of commodities on its side market.

The value of trades at Iran Mercantile Exchange in the previous Iranian calendar year (ended on March 20, 2021) rose 108 percent compared to the preceding year.
During the past year, about 3.5 quadrillion rials (about $83.5 billion) worth of commodities were traded at the mentioned market.

In the past year, several new records were achieved in terms of the volume and value of transactions in the mentioned market’s various floors including the industrial, petroleum, and petrochemical floors.
IME is one of the four major stock markets of Iran, the other three markets are Tehran Stock Exchange (TSE), Iran's over-the-counter (OTC) market known also as Iran Fara Bourse (IFB), and Iran Energy Exchange (IRENEX).