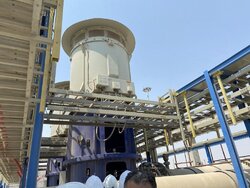 Desalination plants in southern Iran are currently providing 600,000 cubic meters of drinkable water for the region’s coastal provinces, and the figure will be increased to one million cubic meters in the near future, the spokesman of Water and Wastewater Company of Iran told IRIB on Thursday.

According to Hamidreza Kashfi, the one-million-cubic-meters target should be achieved under the framework of the country’s Sixth Five-year National Development Plan (2016-2021).

“Currently, the government purchases the water produced in desalination plants through guaranteed purchase deals with the investors, and with the required credit being supplied [by the government], we can supply up to one million cubic meters of drinking water in the southern regions of the country,” Kashfi explained.

The official noted that according to studies conducted in recent years, it is possible to supply drinking water to the southern coastal regions of the country through desalination plants.
He put the cost for producing each cubic meter of water in a desalination plant at one dollar, saying that since the knowledge for the construction of the necessary equipment in this field has been indigenized the coasts have been reduced to 70 cents in Iran.

Over the past decade, Iran has been preparing a plan to deploy desalination plants on the shores of the Persian Gulf and the Sea of Oman in order to supply drinking water to the coastal provinces.
Back in November 2020, President Hassan Rouhani inaugurated the first phase of a major water desalination and transfer project which is aimed at supplying Persian Gulf waters to central Iran through a pipeline.

According to Iran’s Energy Minister Reza Ardakanian the Government has earmarked the budget for desalination of 8.2 billion liters of water a year and the operational work for 760 million liters of the mentioned figure has already been started.