About 10,000 km of railway projects under study 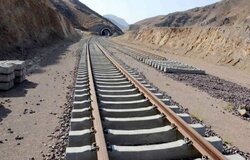 Iran's outgoing transport minister said that about 10,000 kilometers of railway projects are currently under study.

Pointing out that the length of the country's railway network has reached 14,000 kilometers, Mohammad Eslami said, “Eight rail lines in three provinces will be connected to the country's railway network. The projects for connecting Kordestan, Ardebil, and Chaharmahal-Bakhtiari provinces to the national network have a noticeable progress at the moment and will be inaugurated in the coming months.”

As the deputy minister has recently announced, 825 kilometers of railroads are going to be constructed across the country by the end of the current Iranian calendar year (March 20, 2022).

This year, eight railway projects are in priority, and with their opening, 825 km will be added to Iran's railway, Kheirollah Khademi, who is also the managing director of Iran's Construction and Development of Transportation Infrastructures Company (CDTIC), stated.

One of the priority railway lines in the present year was the Khaf-Herat railway, 140 km of which was built inside Afghanistan and was put into operation in recent months, and the second is the Yazd-Eqlid 271-km railway, which is almost completed, the official explained.

The Zahedan-Khash railway is also part of the north-south corridor, 150 km of which has been laid, and the process of adjusting its line is underway, and it seems that its operation will be final this year, he said, adding that the Bostan Abad-Tabriz railway with a progress of about 90 percent and a length of 44 km will be ready to open in the near future.

The Rasht-Caspian Railway, as an important part of the 37-kilometer north-south corridor with a progress of about 70 percent can be put into operation as one of the country's rail priorities by the end of this year, he noted.

Also, the Hamedan-Sanandaj railway line is 151 km long and has a physical progress of 76 percent, Khademi added.