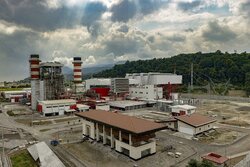 According to Roohollah Espanani, this combined cycle power plant, called Caspian, is constructed with €260 million of investment and has the capacity of 460 megawatts (MW), the portal of the Energy Ministry known as Paven reported.
The efficiency of the power plant, which is located near Nowshahr city in northern Mazandaran province, is 58 percent in the combined cycle mode.

It is the first single-axis power plant in the country that uses Class F gas turbines and its commercial operation, while helping to meet the needs of the country's electricity network, will play an important role in reducing blackouts in Mazandaran province during the peak consumption period in the upcoming years, the official said.

“High efficiency of the Caspian power plant is considered an important step in the implementation of the country's general policies regarding the optimal use of fuel and prevention of wasting national wealth; this high-efficiency power plant, in addition to saving billions of dollars in natural gas consumption, has a significant impact on reducing polluting emissions, especially in Mazandaran province,” Espanani said.

The official noted that one of the unique features of this power plant is the installation of a water treatment system (WTP) using Electrodeionization (EDI) method and said: “The project of this power plant has been implemented by the private sector in the form of a guaranteed electricity purchase contract between Mahtab Caspian Power Generation Company and Thermal Power Plant Holding.”

According to Espanani, TPPH will purchase the electricity generated by private power plants at a guaranteed price and supplies it to the electricity market.
The company is also responsible for fuel supply and operation of supply facilities, he added.