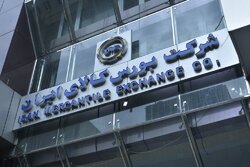 Over 636,000 tons of commodities worth more than 103 trillion rials (about $2.452 billion) were traded at Iran Mercantile Market in the past Iranian calendar week (ended on Friday).

It's worth noting that there was 16,605 tons of various types of commodities traded on the IME's side market.
The value of trades at Iran Mercantile Exchange in the previous Iranian calendar year (ended on March 20) rose 108 percent compared to the preceding year.
During the past year, about 3.5 quadrillion rials (about $83.5 billion) worth of commodities were traded at the mentioned market.