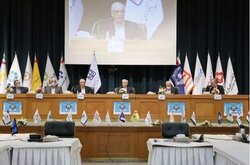 The former governors of the Central Bank of Iran (CBI) have said the president should not intervene in the country’s specialized economic decisions which are mainly made by the CBI, Mehr News Agency reported.

In a meeting on the sidelines of the Islamic Banking Conference on Wednesday, the officials stressed the need to stop following the wrong policies of the past and to use treasury bonds to compensate for the budget deficit.

Speaking in this meeting, former CBI Governor Mohammad-Hossein Adeli said the first and foremost issue that the government should consider is to have its own income.
“The government is able to make internal and external arrangements to increase its income,” Adeli stressed.
The official noted that reforming the budget structure requires decreasing the government costs and this is the only way forward.

“Instead of putting pressure on the government and the banking system, treasury bonds can be used to compensate for the budget deficit. These bonds are underdeveloped and the methods used for preparing them are not appropriate. Now it is up to the financial policymaker to build the right market for such treasury bonds,” he added.

Elsewhere in the meeting, Tahmasb Mazaheri said: “I advise the government not to follow in the footsteps of the previous government to improve the situation. What we saw in President Raisi's government plans in the economic sector is that a large part of them are the repetition of the policies and views of previous governments.”

Mahmoud Bahmani for his part stressed the need for battling corruption, saying: “It is very difficult to fight corruption because there is a lot of resistance against it.”

Iran’s 31st Islamic Banking Conference kicked off at the place of the Central Bank of Iran in capital Tehran on Tuesday.