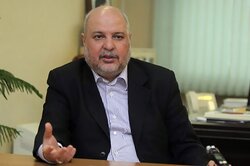 Speaking in a ceremony on the occasion of the government week on Tuesday, Masoud Mir-Kazemi said: “We can achieve eight percent economic growth if we try, and it is possible.”
Iran’s new government that took office last month has pledged to make economic growth its main priority.

Last week, the new Minister of Finance and Economic Affairs Ehsan Khandouzi said ensuring economic growth is one of the main priorities of the ministry during his tenure.
Stating that the country’s economy requires several short-term programs with good effectiveness, the official said: “Of course, these short-term measures must be considered in the long-term path toward economic reform.”

According to Khandouzi, the ministry’s short-term measures include enhancing the role of the Ministry of Economy in macroeconomic policy-making to restore stability to the country's economy, reducing price and currency fluctuations and stabilizing the markets, and then moving rapidly toward economic growth and increasing per capita income.

The World Bank also expects the Iranian economy to follow an upward trend in the next few years as the country is emerging from the negative aftershocks of the coronavirus pandemic.
According to the World Bank’s Macro Poverty Outlook (MPO) report for spring 2021, the Iranian economy is projected to grow by 2.1 percent in the current fiscal year (March 2021-March 2022) as the domestic markets are getting back on track and the negative impacts of the coronavirus pandemic begin to wane.

According to the mentioned report, Iran’s Gross Domestic Product (GDP) is going to continue its positive growth over the next two fiscal years (2022-2024), expanding by 2.2 and 2.3 percent, respectively.
“Despite an initial COVID-19 induced shock to GDP, a strong rebound in mid2020 led to a modest economic expansion in 2020/2021. The COVID-19 output loss since Feb 2020 was less pronounced [in Iran] than in other countries,” the report stated.

Based on the report, the inflation in the country will also decrease over the next three fiscal years. The bank sees the inflation to stand at 29.3 percent in the current Iranian calendar year (ends on March 21, 2022), while the figure is seen falling to 21.7 percent and 18.6 percent over the next two years.