‘Managing budget deficit a priority of Economy Ministry next year’ 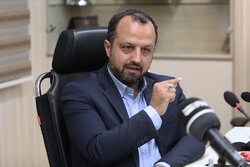 Iranian Finance and Economic Affairs Minister Ehsan Khandouzi has said controlling budget deficit will be the main priority of his ministry in the next Iranian calendar year (begins in March 2022), IRIB reported.

Speaking at a meeting with the country’s economic experts and scholars on Saturday, the official stressed the need for coordination among government entities, saying: “In particular, we strive for the Planning and Budget Organization (PBO), the Ministry of Economy, and the Central Bank of Iran (CBI) to have the most coordination on economic policy-making.”

Khandouzi further stressed the need for continuous communication between the Economy Ministry and the country’s economic experts and scholars and added: "Economic experts should have access to information so their access to the latest economic situation and statistics in the country should be facilitated."
The minister had earlier said financing the government and ensuring economic growth were also among the major priorities of the ministry during his tenure.

"The main responsibility of the Ministry of Finance and Economic Affairs is to finance the government and ensure economic development using sustainable, safe, and low-risk methods," Khandouzi said on August 27, the first day of his work as economy minister.
Stating that the economy requires several short-term measures with good effectiveness, the official said: “Of course, these short-term measures must be considered in the long-term path toward economic reform.”

According to Khandouzi, the ministry’s short-term measures include enhancing the role of the Ministry of Economy in macroeconomic policy-making to restore stability to the country's economy, reducing price and currency fluctuations and stabilizing the markets, and then moving rapidly toward economic growth and increasing per capita income.
Helping to rearrange the performance of the Iranian economy with the aim of neutralizing sanctions and to ensure that the Iranian economy is not so fragile and vulnerable is also on the agenda.