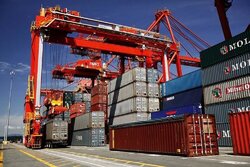 The deputy head of the Islamic Republic of Iran Customs Administration (IRICA) said that the clearance of basic commodities from the customs has been expedited.

Mehrdad Jamal Orounaqi, the IRICA deputy head for technical affairs, announced that over 10 million tons of basic goods worth more than $5.5 billion have been cleared through the country’s customs since the beginning of the current Iranian calendar year (March 21) until September 1.
The mentioned commodities which were subject to receiving preferred foreign currency show 68 percent and 17 percent rise in terms of value and weight when compared to the basic goods cleared trough the customs in the same period of time in the past year, the official noted.

The official said 24 vessels loaded with 1.3 million tons of such commodities are currently waiting at the ports to unload their cargoes.
At present, the storage of basic goods is mainly at the Imam Khomeini Port with more than 3.2 million tons, Rastad said, adding that the total number of ships that are unloading in the country’s ports is 18, of which 10 are at Imam Khomeini Port.

Referring to the importance of Imam Khomeini port, Rastad said in the fifth month of the current Iranian calendar year (July 22-August 22) about 1.5 million tons of goods were unloaded at this port, with a daily average of 46,750 tons.
“Every day, on average, 52,799 tons of goods were also distributed from this port by truck and through the rail network,” he added.

Back in July, Head of Iran Road Maintenance and Transportation Organization Darioush Amani said that over 154 million tons of basic goods were transported through Iran’s roads in the first three months of the current Iranian calendar year (March 21-June 21) of which 6.5 million tons were distributed from the country’s ports.

“Some 62 percent of these basic goods were distributed from Imam Khomeini port and the rest from Bandar Abbas and Amirabad ports,” Amani told IRIB.