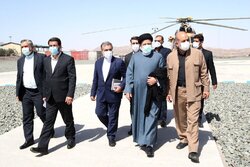 Iranian President Seyyed Ebrahim Raisi has traveled to the northeastern South Khorasan Province on Friday to explore the issues in the province and to follow up on the implementation of the government’s development programs in the region, IRNA reported.

Water supply, providing job opportunities, developing mining economy, completion of road and railway infrastructure, activation of border markets, and tourism economy were among the most important areas that Raisi emphasized as priorities for the development of the province during his visit.

The president was accompanied by senior government officials including Transport and Urban Development Minister Rostam Qassemi, Head of Iran's Planning and Budget Organization (PBO) Masoud Mir-Kazemi, and Industry, Mining and Trade Minister Reza Fatemi Amin during the visit.
According to Raisi, the purpose of his provincial trips was to investigate the problems and issues without the usual formalities, so that in this opportunity, decisions can be made to resolve issues with the participation of the people and government officials.

During his visit to South Khorasan province, the President said that the border is an opportunity, emphasizing that the activation of border markets in the provinces, including South Khorasan should become a priority for the provincial officials.

“Despite all the problems ahead, I see a very bright and hopeful future, and as someone who knows the situation, I say that with the help of the people, scholars and with the participation of all government entities, the situation will change for the better and we will surely succeed in this regard,” Raisi said.

“Tabas Parvadeh mine is the largest coal mine in the country, which accounts for 75 percent of the country's coal reserves,” Fatemi Amin stated.

The Minister of Transport and Urban Development who was also accompanying the President during his visit to the province said people should not worry about housing in this province.

“With one million housing units built annually in the country, people do not have to worry about housing problems,” Qassemi said.