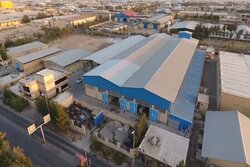 The head of Iran Small Industries and Industrial Parks Organization (ISIPO) announced that 499 idle industrial units have been revived in the country during the first five months of the current Iranian calendar year (March 21-August 22).

According to Ali Rasoulian, the mentioned units have created job opportunities for over 12,478 people, IRNA reported.
Rasoulian said that reviving 1,600 idle and semi-active industrial units in the industrial parks and zones, as well as 400 units outside of such parks, is targeted for the current fiscal year.

The mentioned programs include providing infrastructure for industrial parks and zones and reviving idle and semi-active industrial units, he explained.

Last year, 1,557 stagnant and semi-active units returned to the production cycle in the industrial parks with the financing of 35 trillion rials (over $833 million), providing employment for 27,000 people, the ISIPO head further said.

With the aim of reactivating stagnant units or units that are operating below capacity, 900 consultants from the private sector and knowledge-based companies were selected in the form of industry clinics across the country to recognize the weaknesses of these units, Rasoulian has previously stated.

“Despite the two major challenges of sanctions and coronavirus pandemic, which imposed severe restrictions on the country, we tried to activate domestic capacities by turning to localize the technology of manufacturing parts and equipment”, he added.