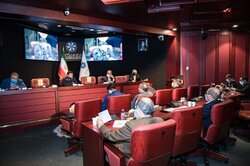 The 26th meeting of the Tehran Chamber of Commerce, Industries, Mines and Agriculture (TCCIMA) Board of Representatives was held on Tuesday in which major economic issues were discussed.

As reported by the TCCIMA portal, barriers to the activity of startups, the benefits of joining the Shanghai Cooperation Organization, review of macroeconomic indicators of the country and monitoring the performance of TCCIMA, and the issues of the private sector enterprises with the Iran National Standard Organization (INSO) were among the major issues explored at the said meeting.

The meeting was attended by the TCCIMA Head Masoud Khansari and the INSO Head Gholamreza Shariati, as well as the members of the chamber’s board of representatives.

Speaking in the meeting Khansari mentioned a report published by the United Nations Industrial Development Organization (UNIDO) based on which Iran’s industrial sectors have grown by 8.4 percent and 6.1 percent in the first and second quarters of 2021, respectively.

He also referred to the growth of the country’s Gross Domestic Products (GDP) in the first quarter of the current Iranian calendar year (March 21-June 21) and said: “Reports recently published by the Central Bank of Iran (CBI) and the Statistics Center of Iran (SCI) indicate that economic growth, including oil, in the first quarter of this year was 6.2 percent, according to the CBI, or 7.6 percent, according to the SCI, and if this trend continues, we hope economic conditions will get better.”

Khansari went on to discuss the statistics of liquidity growth and monetary base and explained: "Liquidity growth is still on the rise; the liquidity figure in [the Iranian calendar month of] Mordad (July 22-August 22) reached 39.21 quadrillion rials (about $933.5 billion), which is a very high figure and has experienced huge growth. “

“The main reason for this increase in liquidity is the budget deficit. According to the latest reports, the country's revenues and expenditures do not match at all, and perhaps less than 50 percent of the country's expected revenues have been realized in the last five months, and the government has to use the central bank's resources to cover its expenses, which increases the monetary base,” he added.