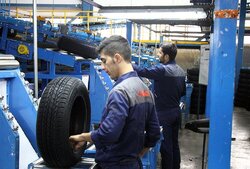 Iranian tire manufacturers produced 106,289 tons of the product during the first five months of the current Iranian calendar year (March 21-August 22) to register a 0.4 percent rise compared to the same period of time in the past year.

Over 9.81 million tires were produced during the five-month period of this year, indicating a 1.5 percent decline in terms of number, IRNA reported.
According to the statistics, in the mentioned period, the highest growth was due to the production of passenger car tires, which increased by 86.7 percent in number and 57.6 percent in weight compared to the same period last year.

During this period, more than 8.509 million passenger car tires weighing 61,292 tons have been produced in the country.

In the period under review, some 11,006 tons of van tires were also produced, indicating a 19-percent growth. Meanwhile, 22,753 tons of truck and bus tires were produced, showing a seven-percent rise.
Production of the tires of light agricultural vehicles experienced a decline of 30 percent to stand at 1,561 tons, while that of the heavy ones also declined two percent to stand at 7,670 tons.

In a bid to nullify the U.S. sanctions, Iran is determined to strengthen its domestic production to achieve self-reliance.
Selecting the motto of “Pickup in Production” for the Iranian calendar year 1398 (March 2019-March 2020), and the slogan of “Surge in Production” for the year 1399 (March 2020-March 2021) indicates the Islamic Republic’s determination to achieve this goal.
To this end, the Iranian ministries besides the private sector outlined their programs for the surge in production in the past year and pursued the set objectives seriously in this due.

It is clear that among different ministries, the Ministry of Industry, Mining, and Trade was one with a somehow heavier responsibility to materialize the motto of the year.
The ministry managed to fulfill its duty as the production of some major industrial products was noticeably increased in the previous year.

One of the sectors, which achieved outstanding output growth, was the tire production industry.
The country's tire industry, despite the continuation of sanctions and the coronavirus pandemic conditions, as well as some domestic restrictions, has had a thriving and successful year overall; a year that was accompanied by record-breaking production and entry into some new fields.

In this regard, the breaking of production records in the production of various types of tires was witnessed, and for the first time, the annual output surpassed 24 million tires.

In addition to the successes achieved in terms of the output amount, the tire manufacturers entered new areas including production of the wide base tires and the tires of SUVs.

Wide base tires, which are a new generation of heavy vehicles’ tires, were produced for the first time in West Asia by Iranian producers.