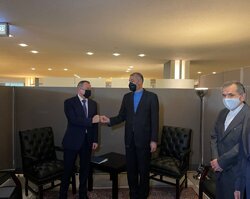 Foreign affairs ministers of Iran and Belarus in a meeting in New York on Wednesday emphasized the need for expansion of bilateral economic ties.

Hossein Amir Abdollahian and Vladimir Makei met on the sidelines of the UN General Assembly and exchanged viewpoints on bilateral ties and economic cooperation between the two countries, IRNA reported.

The Belarus foreign minister in the meeting emphasized Minsk’s willingness for implementing an agreement reached last week in a meeting between the two countries’ presidents on the sidelines of the Shanghai Cooperation Conference in Dushanbe.
“The oppressive sanctions imposed against both countries can only face defeat based on our joint cooperation,” said Makei.

He emphasized that his country is ready for comprehensive cooperation with Iran and the establishment of balanced economic relations with Iran.

Makei referred to the numerous meetings at the technical level between the two countries, noting that implementing the reached agreements is in need of the existence of a strong political will.

The Iranian foreign minister, for his part, said the two presidents' meeting was quite fruitful, and the Islamic Republic of Iran is ready for opening a new path for the improvement of bilateral ties.
Amir Abdollahian expressed regret that the volume of bilateral trade has decreased despite the reached agreements, reiterating that Iran is ready for serious cooperation with Belarus in various fields such as industrial and heavy machines, agricultural machines, electrical buses, car spare parts, and agricultural items.

The Iranian foreign minister referred to the cancellation of the two countries' joint economic committee meeting over the past four years and called for the holding of the mentioned meeting.
Amir Abdollahian said that it is also possible to use the Eurasian Economic Union (EAEU) for the expansion of bilateral ties.