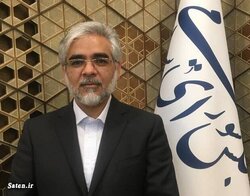 Hossein Qorbanzadeh was appointed as the new head of the Iranian Privatization Organization (IPO), IRNA reported.

Finance and Economic Affairs Minister Ehsan Khandouzi appointed Qorbanzadeh to the post in a decree on Sunday.
Qorbanzadeh replaced Hassan-Ali Qanbari who was appointed to the position back in January.

Amendment of the general policies for the implementation of Article 44, taking necessary measures for achieving the objectives of the general policies of Article 44, using new methods in pricing in the privatization process, and reforming the methods for offering the shares of government-owned enterprises to the private sector are emphasized by the Economy Minister as major tasks of the new IPO head.

Hossein Qorbanzadeh is an Iranian journalist and politician who was previously the General Secretary of Progress and Justice Population of Islamic Iran. He has also served as the chief editor of Hamshahri newspaper. He was previously editor-in-chief of Tehran Emrooz newspaper.

The Iranian Privatization Organization affiliated with the Ministry of Finance and Economic Affairs is in charge of implementing the country’s privatization programs by setting prices and ceding shares to the general public and on the Tehran Stock Exchange (TSE).