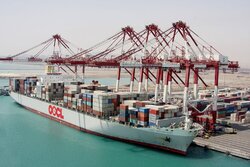 We are trying to boost our non-oil exports by improving the logistics sector and preferential tariffs, and also by reforming laws, regulations, and structures in the trade advisory sector,” Alireza Peyman Pak said on Saturday. According to the plans, priorities have been set for the export target markets to increase the country's exports by $35 billion over the next four years, he said.

The official noted that in countries such as Venezuela, with which Iran has close financial ties, a mechanism has been defined for barter trade of priority goods, including home appliances.
“Considering the fact that most of the countries are promoting domestic production in recent years, we are also considering the exports of parts and even joint production of some products in the coming years,” Peyman Pak added.

To support non-oil exports during the sanctions and the coronavirus pandemic, the Iranian government has defined some new strategies and has been pursuing them vigorously.
The major strategy is to focus on the neighboring countries and the trade partners in the region, and it is, in fact, one of the top priorities of the government for defying the U.S. sanctions.
Back in April, Iran’s Supreme Council of Non-oil Exports Promotion approved new regulations for facilitating the country’s non-oil trade, especially with the neighboring countries, in the current Iranian calendar year (started on March 21).

Mentioning the current year’s motto which is “Production: Support and the Elimination of Obstacles”, the official underlined planning for the development and expansion of non-oil exports as well as the promotion of export culture as the TPO’s main priority in the current year.