Commodities worth $400m traded at IME in a week 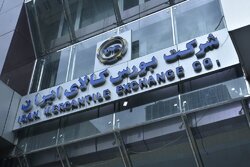 During the past Iranian calendar week (ended on Friday), 1.606 million tons of commodities worth $399 million was traded at Iran Mercantile Exchange (IME).

As reported by the IME’s Public Relations and International Affairs Department, the exchange experienced trade of 1.222 million tons of commodities valued at more than $190 million on its metals and mineral trading floor.

It's worth noting that the IME witnessed trade of 500 kg of saffron on its agricultural trading floor.
Last but not least was the IME's side market with 7,764 tons of commodities traded on it.
As previously reported, the value of trades in Iran Mercantile Exchange rose 50 percent in the sixth Iranian calendar month Shahrivar (ended on September 22), as compared to its previous month.
More than 8.062 million tons of commodities worth $2.013 billion was traded at the exchange in the mentioned month, showing also 70 percent growth in terms of weight.

Moreover, the IME sold on the same floor 34,645 tons of sulfur, 1,610 tons of insulation and 194,000 tons of lube cut.
It's worth noting that there was also 860 kg of saffron traded on the agricultural trading floor.
Last but not least, the exchange played host to trading 39,198 tons of various types of commodities on its side market.

The value of trades at Iran Mercantile Exchange in the previous Iranian calendar year (ended on March 20) rose 108 percent compared to the preceding year.
During the past year, about 3.5 quadrillion rials (about $83.5 billion) worth of commodities were traded at the mentioned market.