Over $468m of facilities paid to production units in H1 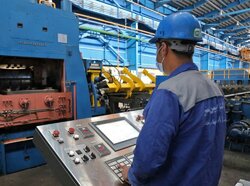 Iran’s Ministry of Industry, Mining and Trade has announced that 19.679 trillion rials (over $468.5 million) of facilities were paid to production units as part of a program for supporting domestic production during the first six months of the current Iranian calendar year (March 21-September 22).

As reported, under the framework of this program dubbed “facilities for production and employment”, bank facilities are offered to newly established production units or semi-finished industrial projects with over 60 percent of physical progress.

Based on the mentioned program, 201.299 trillion rials of facilities (about $4.79 billion) have been planned to be paid to production units to support domestic production and maintain or create job opportunities.

Part of the said figure is provided by the National Development Fund (NDF) and part of it is supplied by the banking system.

Over 7,830 production units have registered for bank facilities since the program started in late Iranian calendar year 1397 (ended in March 2019). The program kicked off in February 2019 by the Industry

Ministry in collaboration with the Central Bank of Iran (CBI).
Following a major plan for developing the country’s production under the frameworks of the resilient economy, the government has defined several projects with the aim of creating 1,032,962 job opportunities.

In this regard, CBI has put supporting production on the agenda as a major plan over the past two years.