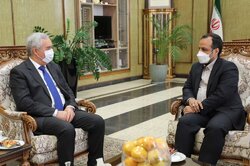 Iranian Finance and Economic Affairs Minister Ehsan Khandouzi, in a meeting with Tajikistan’s Ambassador to Tehran Nizamuddin Zahedi on Sunday, stressed the need to take the necessary measures for boosting the two countries’ trade level up to €500 million.

As IRIB reported, in this meeting, Khandozi referred to Iran's determination for promoting relations with neighboring countries and stressed the importance of planning for developing long-term cooperation in economic and technical fields.

It was also decided in the meeting that in the upcoming meetings of the two countries’ officials, issues such as the signing of a memorandum of understanding for technical and economic cooperation would be on the agenda.

Back in September, President Ebrahim Raisi visited Dushanbe on top of a high-ranking delegation to participate in the Shanghai Cooperation Organization (SCO) summit and held talks with his Tajik counterpart Emomali Rahmon.

Speaking with the Tajik leader, Raisi stressed that Iran and Tajikistan enjoy good capacities to expand ties. He said an increase in ties will pave the way for regional cooperation.
On the sidelines of Raisi’s visit to Tajikistan, officials from both sides had also met and set the goal for promoting trade ties to €500 million per year.

Earlier in June, Dushanbe had hosted the 14th meeting of the Iran-Tajikistan Joint Economic Committee.

Promoting economic relations was the major focus of the mentioned meeting which was co-chaired by Former Iranian Energy Minister Reza Ardakanian and Tajikistan’s Minister of Energy and Water Recourses Daler Juma.