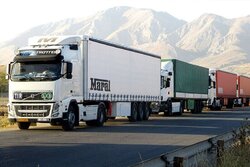 Representatives of the private sectors of Iran and Turkmenistan have stressed the need for developing transportation and transit infrastructure at common borers as the prerequisite for the expansion of trade ties.

In a meeting between the Head of Iran Chamber of Commerce, Industries, Mines and Agriculture (ICCIMA) Gholam-Hossein Shafeie and the chairman of the Union of Industrialists and Entrepreneurs of Turkmenistan, Shafeie said the growth of economic cooperation between the two countries depends on the development of such infrastructure.

As reported by the ICCIMA, the officials met on the sidelines of the meeting of the Economic Cooperation Organization (ECO) member states in Ashgabat.
Speaking in this meeting, the Turkmen side emphasized that Turkmenistan is completely neutral in its relations with other countries and does not place any restrictions on the development of mutual cooperation.

“Iran is a large country with a long history of cooperation in various fields, and we would like to cooperate with the Iranian side in various fields of agriculture, industry, mining, and services,” he said.
The official stressed the need for the development of relations between the two countries in various economic and trade sectors, saying that the private sectors of the two countries have the ability to develop various activities and this capacity can be used.

“Unfortunately, despite our interest in developing relationships, the outbreak of coronavirus has overshadowed some of these activities and we have not been able to make good use of our common capacities, which we hope will be remedied in the near future,” he said.

Criticizing the non-implementation of the agreements reached within the ECO framework, including the ECO Trade Agreement (ECOTA), the Visa Facilitation Agreement, the ECO Transport and Transit Framework Agreement, etc., Shafeie said: "I hope all countries will cooperate in the ECO trade forum so that the effective interaction of the private sectors and governments of the ECO members can pave the way for the development of cooperation within the region.”