Renewables prevent emission of 61,000 tons of GHG in a month 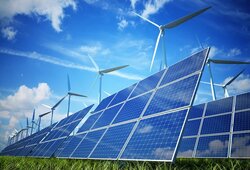 Electricity generation from renewables in the mentioned period has led to economizing on the consumption of natural gas by 27 million cubic meters and water by 21 million liters in the said month.
As reported, 94 million kilowatts of electricity has been generated from the renewable sources in the ninth month.

Based on Iran’s Sixth Five-Year National Development Plan (2016-2021), the country was aiming for 5,000 megawatts (MW) increase in renewable capacity to meet growing domestic demand and expand its presence in the regional electricity market.

But in the final year of the plan, only one-fifth of the figure was achieved.
Iran was supposed to become a regional hub in the field of energy in the past Iranian calendar decade (March 2011-March 2021), but evidence shows that the country is facing a shortage even in the supply of electricity inside the country, an issue that many believe that could be achieved by developing renewable energy and increasing efficiency of the thermal power plants.

After the Joint Comprehensive Plan of Action (JCPOA), known commonly as the Iran nuclear deal, in July 2015, many foreign delegations came to Iran for making investments and constructing renewable power plants in the country.

Speaking in the Second Belt and Road Energy Ministerial Conference which was held by the National Energy Administration of the People’s Republic of China (NEA) through video conferencing, Mehrabian said: “The current government has a four-year plan to increase the capacity of the country’s renewable power plants by 10,000 megawatts.”

According to the former Energy Minister Reza Ardakanian, the country has great potentials in the field of renewable energies and can have a significant role in developing the region’s market for such energies.

“Relying on the high potential of renewable energy sources, including solar, wind, biomass, geothermal, etc., the Energy Ministry has planned good measures in order to implement new policies for creating positive changes in the development of the country’s renewable energy sector,” Ardakanian has said.

And in last November, the head of Iran’s Renewable Energy and Energy Efficiency Organization (known as SATBA) said that in line with the plan for generating 10,000 megawatts (MW) of electricity from renewable sources through domestic and foreign investment, the private sector has already announced its readiness for generating 32,000 MW.

Speaking in a news conference, Mahmoud Kamani said that the private sector’s readiness in this due is expected to rise for generation of 60,000 MW of electricity.