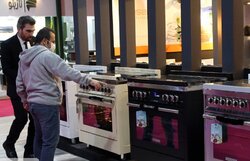 Iran exported $212 million worth of home appliances during the first nine months of the current Iranian calendar year (March 21-December 21, 2021) to register a four-percent rise year on year, an official with the country’s Trade Promotion Organization (TPO) announced.

According to Badri, the exports of the mentioned products in the previous year had also increased by four percent compared to the figure for its preceding year, IRNA reported.

He pointed to the fight against the smuggling of such products as an effective factor contributing to the growth and development of the production of home appliances and said: "The strong dependence of home appliance industry on importing raw materials, the large number of home appliance production units and the need for the indigenization of the technology in this industry are among the problems and challenges faced by producers."

Referring to the trade potential of Eurasian countries, Badri said: "Exporters and producers should use the opportunity that the trade agreements with these countries has presented."
Over the past few years, the Iranian government has been following a new strategy for supporting domestic production to neutralize the impacts of the U.S. sanctions while reducing the reliance of the economy on oil revenues.

The home appliances sector has been one of the pioneers in this regard and like many other areas, the production of home appliances has witnessed a significant rise in the past two years.

Back in October 2021, Industry, Mining, and Trade Minister Reza Fatemi Amin said the country’s home appliance exports are set to become twice as much as the volume of imports by the Iranian calendar year 1404 (starts in March 2025).

Speaking in a meeting with the representatives of the country’s home appliance manufacturers, Fatemi Amin said: “Statistics show that the export of home appliances is much less than the imports in this sector.”

Emphasizing that despite the growth of production in the home appliance industry, the ratio of exports to imports is not defensible, the official added: "This trend should change so that the exports to imports ratio would double by 1404."

“Plans should be made so that next year we will see a 50 percent growth in exports over imports,” he said, noting that an appropriate trade balance in the home appliances industry is the next goal in this sector for the Iranian calendar year 1402 (begins in March 2023).