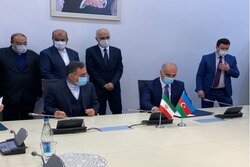 Iran and the neighbor Azerbaijan have signed a memorandum of understanding (MOU) for cooperation in constructing a bridge over the Astarachay border river, the portal of the Iranian Transport Ministry reported.

The MOU was signed by Iranian Deputy Transport and Urban Development Minister Kheirollah Khademi and Azerbaijan’s Deputy Minister of Digital Development and Transport Rahman Hummatov in Baku on Tuesday.

As reported by IRNA, the project for the construction of the mentioned bridge was commenced in a ceremony attended by Iranian Transport Minister Rostam Qasemi and Azeri Deputy Prime Minister Shahin Mustafayev.

Qasemi, who is also the head of the two countries’ Joint Economic Committee, traveled to Azerbaijan on top of a delegation on Monday to visit the country’s economic areas and explore avenues of mutual cooperation.

Iran and Azerbaijan had earlier announced the total investment made in the project to be 4.7 million euros.

The construction of Astarachay bridge is going to be a positive step in completing the North-South Corridor and is expected to open a new gate for the development of all-out relations between the two neighbors.

Speaking in the mentioned ceremony, Mustafayev said the construction of the bridge is scheduled to be completed by the end of the current year.

"The president and the government of the Republic of Azerbaijan attach special importance to the development of relations with the Islamic Republic of Iran, and the presidents of Iran and Azerbaijan expressed interest in further developing relations between the two countries in a cordial meeting in Ashgabat," the official said.

“Despite the Coronavirus pandemic in the last two years, the trade turnover of Iran and the Republic of Azerbaijan in the first 11 months of 2021 increased by 30 percent compared to the previous year and the amount of road transport also increased by 62.5 percent.”

He pointed to the development of relations with neighbors as one of the priorities of the Iranian government and, referring to Iran's participation in the implementation of projects in Azerbaijan’s liberated territories [in Karabakh], said: "Cooperation between the two countries in this area can accelerate the reconstruction of these regions.”

Qasemi noted that the development of transport and transit in the region is in the interest of both countries, and said that the two countries’ Joint Economic Committee could help deepen economic relations between them, as well as provide the necessary facilities for businessmen and entrepreneurs.

Elsewhere in the ceremony, Khademi also considered the construction of the Astarachay bridge as an effective step in completing the north-south corridor and said: "The construction of this bridge will lead to economic, tourism, industrial and transportation development of the two countries due to the cultural, social and religious commonalities of the two neighboring countries."
“The Astarachay border bridge will lead to the development of transit between the two countries, which, in parallel with the existing railway bridge, will lead to the comprehensive development of the region,” he said.