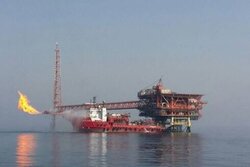 Director of production and operations at Pars Oil and Gas Company (POGC), which is in charge of developing giant South Pars gas field in southern Iran, has said the field meets 70 percent of the natural gas need in the country, Shana reported.

According to the official, 60 percent of the field, which Iran shares with Qatar in the Persian Gulf, is in the Arab country’s territorial waters and 40 percent belong to Iran.

Processing the output of two south Pars phases, each refinery of the South Pars Gas Complex (SPGC) produces 50 million cubic meters of gas, 2,750 tons of ethane, propane, and butane, 77,000 barrels of gas condensate, as well as 400 tons of sulfur on a daily basis, the official said.
“Each two-phase refinery accounts for one percent of the country’s Gross Domestic Product (GDP), earning the country $10 million a day and $3.5 billion a year,” Ebadi added.

He put the total investment made in South Pars at $81 billion, saying that the field needs another $7.8 billion to be completed.