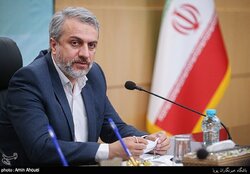 According to Farzad Piltan, the director-general of TPO's Office of Arabian and African Countries, Fatemi-Amin will be accompanied by TPO Head Alireza Peyman-Pak and the heads of some trade-related government entities.

The minister will travel to the UAE on February 6 to visit the EXPO Dubai and also attend a meeting with Iranian businessmen active in the UAE market, Piltan said.
During the three-day visit, Fatemi-Amin will also meet with the UAE government and private sector officials to discuss economic and trade relations, he added.

The Iranian delegation will then visit Oman during February 8-11 to attend the 19th Iran-Oman Joint Economic Committee meeting.

During the event, Fatemi-Amin will meet with political, economic, and private sector officials from Oman.
The two sides are going to discuss expansion of cooperation in a variety of areas including investment, trade, industry, mining, aviation and maritime transport and transit, energy, technical and engineering services, tourism, culture, as well as judicial, consular, labor and health issues, during the two countries’

joint economic committee meeting.
According to Piltan, these two trips have been organized in line with the government's plans for developing economic and trade diplomacy with countries in the region, especially Iran's southern neighbors.

He noted that considering the TPO‘s general policy in providing the necessary conditions for the activities of the Iranian private sector in neighboring countries, resolving the issues and problems of this sector are to be on the agenda of meetings and negotiations during the mentioned visits.