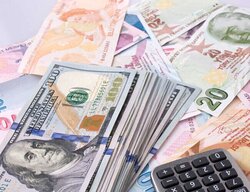 From the total foreign debt, $6.619 billion was mid-term and long-term debts while $2.447 billion was short-term debts, the data indicated, IRIB reported.

Some $6.574 billion of the total foreign debt in the mentioned period was mid-term and long-term debts while $2.457 billion was short-term debts.

Foreign debt as a percentage of Gross Domestic Product (GDP) is the ratio between the debt a country owes to non-resident creditors and its nominal GDP.

Back in January 2021, Deputy Minister of Finance and Economic Affairs Mohammad-Ali Dehqan Dehnavi had said the country’s foreign debts were very insignificant.

“Currently, the volume of Iran's foreign debt is extremely small due to the existing restrictions,” said.
The official noted that using foreign debts could be a positive opportunity, meaning that the government can borrow from abroad and invest inside the country.

According to Dehnavi, most of the government’s debts are internal.
Having external debts is important globally, but it is not currently important for Iran since the country has almost no foreign debts.

Iran’s external debt has been falling in recent years following a downward trend.