Over 1,960 water, soil preservation projects to be inaugurated in Ten-Day Dawn 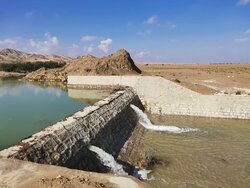 Iranian Agriculture Ministry plans to inaugurate 1,969 water and soil preservation projects across the country during the Ten-Day Dawn (February 1-11), which marks the 43rd anniversary of the Islamic Revolution, IRNA reported.

Akbari noted that implementing the mentioned projects is going to save 60 million cubic meters of water in the country every year.

He mentioned President Raisi’s recent visits to 12 provinces and said during the mentioned visits over 35.34 trillion rials (about $125.76 million) has been allocated for the water and soil preservation projects in these provinces.

According to the official, part of the mentioned funding will be provided to the provinces in the current Iranian calendar year (ends on March 20) and the other part will be supplied in the next fiscal year.

The mentioned allocations will be used in various fields including the development of new irrigation systems, water supply projects, public irrigation canals, improvement and reviving of lands and repairing and reconstruction of existing irrigation canals.

He further mentioned his ministry’s priority projects in the field of water and soil preservation, and said: “We are planning to implement two major projects in the northern provinces (Gilan, Mazandaran and Golestan) as well as Ilam and Khuzestan provinces, which will significantly increase agricultural production in these areas.”