Over 2.5m tons of basic goods imported via Shahid Rajaee port in 10 months 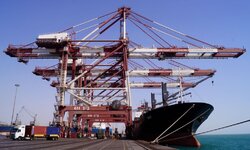 As announced by a provincial official, 2.533 million tons of basic commodities have been imported to Iran through Shahid Rajaee port, in the northern Hormozgan province, during the first ten months of the current Iranian calendar year (March 21, 2021-January 20, 2022).

Masoud Doshvargar, the director-general of Grain and Commercial Services Department of Hormozgan Province, said that since the beginning of this year, 92 ships carrying basic goods have docked in the port of Hormozgan and their cargoes have been stored and unloaded for transportation and storage.

Two months ago, the head of Ports and Maritime Organization (PMO) had announced that unloading of basic goods at the port of country had risen 25 percent in the current Iranian calendar year, as compared to the previous year.

Enjoying the most modern container terminals and port equipment, Shahid Rajaee accounts for 85 percent of the total loading and unloading at the Iranian ports.

Given its significant role in the country’s import and export of products as well as transit and transshipment via Iran, the development of Shahid Rajaee Port has been among the most important development projects in the country.

Implementation and construction of production units in Shahid Rajaee Port will make this port a center for value-added production and a logistics center, which will upgrade the port's level to the third generation and significantly reduce transportation and storage costs.