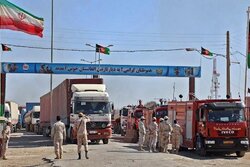 Iran exported 4.187 million tons of commodities worth $1.839 billion to Afghanistan in the previous Iranian calendar year (ended on March 20) to register a 20-percent decline in terms of value compared to the preceding year, ILNA reported.

The weight of the exported goods also decreased by 40 percent year on year, according to the Spokesman of the Islamic Republic of Iran Customs Administration (IRICA) Rohollah Latifi.

The official noted that the Islamic Republic imported only 17,000 tons of goods valued at $19.5 million from the country in the previous year, however, the imports increased by 360 percent and 200 percent in terms of value and weight compared to the figures for the preceding year 1399.
Regarding the reasons for the decrease in exports to Afghanistan, Latifi said: "The decrease in exports was normal given the situation in Afghanistan last year. The first point is that for several months we have witnessed crises in this country and the exporters were faced with ambiguities and concerns about sending their goods to different destinations in Afghanistan.”

On the other hand, there was a change of government in Afghanistan, which led to a change in the rules and trade regulations in this country, he added.
“Another important point was that many projects that were being implemented in the country by the former government or international agencies were stopped or changed, and as a result, there were interruptions in their implementation, or some projects were basically shut down, so consumption of construction materials in this country decreased, and naturally in these conditions, the export of construction materials also decreased,” Latifi said.

He further stressed that stability and security in Afghanistan will definitely be in the interest of all neighboring countries and the region, especially Iran, adding: “Recently, at the Afghanistan Neighbors Summit in China, the attending countries discussed the issue of security and economic prosperity in this country, and if the issues raised in this meeting are implemented, Afghanistan will return to the past economic prosperity and in this case, the reduction of Iranian exports to this country will be compensated.”