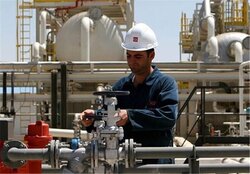 Iraq’s Acting Electricity Minister Adel Karim has said his country is in need of gas import from Iran the coming years, stressing that Baghdad has not struck a deal with the littoral states of the Persian Gulf, IRNA reported.

The Iraqi minister made the remarks on a local TV program, promising a different summer in comparison to previous summers, saying that his ministry was going to take all the necessary measures to meet the electricity demand during the summer.
Karim acknowledged that creating a power grid connection with Arab littoral states of the Persian Gulf would be very costly, noting that the Iraqi government does not accept the prices that such Arab countries propose.

“Iran’s gas is appropriate for Iraq and its price is acceptable,” he said, adding, “We need Iran’s gas for years.”
The minister also referred to three agreements with Qatar, Turkey, and Saudi Arabia, noting that Iraq has not yet reached any deal with these countries on energy prices.
Most Iraqi power plants depend on Iran’s gas and energy export.

Iraq needs 35,000 megawatts per annum and the demand for electricity is expected to increase by 1,500 MW this year, he went on to say.
Iraqi and Iranian oil ministers had previously discussed the increase in Iran’s gas export to Iraq as well as the issue of payback of Baghdad’s debt to Tehran.

Iranian Oil Minister Javad Oji met with his Iraqi counterpart Ihsan Abdul Jabbar on the sidelines of the Gas Exporting Countries Forum (GECF) in Doha in March.
Back in December 2021, Ahmed Musa, the spokesman for the Iraqi Ministry of Electricity, had announced that high-ranking delegations composing of representatives from three ministries of electricity, treasury, and oil along with Salem Chalabi, the CEO of the Trade Bank of Iraq, were scheduled to visit Iran in order to hold talks on demanding for more gas export to the neighboring Arab country.