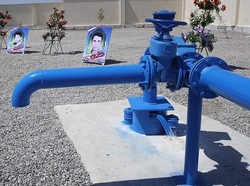 Speaking to the press on the sidelines of a meeting with members of the Agriculture, Water, Natural Resources, and Environment Committee of the parliament on Tuesday, Mehrabian pointed to the issues raised in this meeting, saying "This was our first meeting in the current year 1401 (began on March 21) during which the plans of the Energy Ministry for this year were presented.”

“Hopefully with the budget allocations that have been approved within the framework of the current year’s budget bill, the implementation of the ministry’s programs will be accelerated,” the minister said.
According to Mehrabian, the mentioned comprehensive plan is a large-scale development project which will be implemented in all the provinces, and the water problems of many villages will be resolved when the program is completed.

With regard to the urban water supply, the development of water supply to cities, especially cities in dry areas and those which have emergency plans, has been given priority, the official added.
“This year we hope to be able to implement many of these projects, although we have difficult years ahead due to reduced rainfall. Unfortunately, we are facing serious water problems in some provinces, especially those that have already experienced drought for two consecutive years,” he said.
Iran has been wrestling with severe drought over the past decade and the situation is expected to get worsened in the future.

According to the World Meteorological Organization's multiannual forecast, in the next five years, Iran’s average rainfall will decline by 75 percent, and the temperature rises by 50-75 percent compared to the long-term average.
Back in March 2021, the Vice Presidency for Science and Technology announced the preparation of a national document for preserving water resources, managing drought, and soil erosion, and protecting the environment.

Optimization of water consumption, protection of the environment, management of sand and dust storms (SDSs), and reduction of pollutants in water, air, and soil were the four main themes of the mentioned document.