Over 3m tons of goods loaded, unloaded in Khorramshahr port in a year 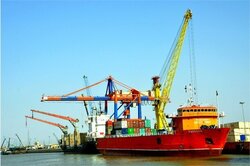 More than 3.181 million tons of non-oil commodities were loaded and unloaded in Khorramshahr port, in the southwestern Khuzestan province, during the previous Iranian calendar year 1400 (ended on March 20), a provincial official announced.

Nourollah As’adi, the director-general of Khorramshahr County’s Ports and Maritime Department, also announced that loading and unloading operations in the container sector of the port reached 20,730 twenty-foot equivalent units (TEUs), which was six percent more than the figure in the Iranian calendar year 1399.

The official named constructional materials, agricultural and livestock products, metals and mining products as the major goods exported from the port in the past year.
Based on the data released by Transport and Urban Development Ministry, loading and unloading of goods in the ports of Iran rose 17 percent during the past year.
The ministry’s data show that loading and unloading of goods in the country’s ports reached 152.91 million tons in the previous Iranian calendar year, while the figure stood at 130.69 million tons in the preceding year.

During the said year, loading and unloading operations in the container sector reached 2.1 million twenty-foot equivalent units (TEUs) with a weight of 24.57 million tons, which was 13.5 percent more than the 1.85 million TEUs in the Iranian calendar year 1399, the report said.
The loading and unloading of goods during the previous year also grew by 12.8 percent in the dry bulk sector, while in the liquid bulk sector the figure increased by 12.6 percent, in the general cargo sector rose by 13.1 percent, and in the petroleum sector grew by 22.5 percent.

While Iran is combating the U.S. unilateral sanctions on its economy, the country’s ports as the major gates of exports and imports play a significant role in this battle. This role makes all-out support to ports and more development of them serious and vital.
Such necessity has led the government to define projects for more development of the ports and also take some measures to encourage investment making in ports, in addition, to facilitate loading and unloading of goods, especially basic commodities, there.

It is worth mentioning that Iran’s Ports and Maritime Organization (PMO) has defined a high number of projects to develop and improve the country’s ports, as the country aims to double the capacity of its ports in a course of five years.
According to Ports and Maritime Organization, the capacity of the country's ports has increased from 180 million tons in the Iranian calendar year 1392 (ended in March 2014) to 250 million tons in 1399 (ended in March 2021).