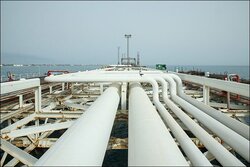 The managing Director of Iranian Oil Terminals Company (IOTC) has said his company is accelerating its currently underway development projects in the country’s oil terminals in order to be fully prepared for boosting oil and gas condensate exports, Shana reported on Monday.

We are fully prepared to export crude oil and gas condensate up to the limit of oil production capacity in line with the macro policies of the National Iranian Oil Company (NIOC),” Abbas Asadrouz said on the sidelines of a visit to Kharg Oil Terminal facilities and development projects. Asadrouz stressed the importance of the Kharg Oil Terminal as a support terminal in the process of storing and exporting crude oil and gas condensate and said: “This terminal has all the necessary infrastructure including berths, loading arms, flow pipelines, storage tanks, and systems.”

Emphasizing that all activities of Iran Oil Terminals Company are pursued in line with the oil industry’s long-term visions, the official stated: “Our general goals include increasing quality and sustainable productivity, increasing creativity and innovation, increasing the quality of life of employees while specific goals include increasing the stability, agility and operational resilience of the company, and continuous improvement of our performance and operational excellence.”

Kharg Island is a continental island in the Persian Gulf south of Iran. The island is located 25 km (16 mi) off the coast of Iran and 483 km (300 mi) northwest of the Strait of Hormuz. Administered by the adjacent coastal Bushehr Province, Kharg Island provides a seaport for the export of oil and extends Iranian territorial sea claims into the Persian Gulf oil fields.

Due to its close distance to oilfield regions, its good offshore position, and suitable depth for gigantic oil vessel berthing, Kharg Island oil terminal has been recognized as one of the country’s most suitable places for crude oil export and loading sites.