Over 2m tons of commodities traded at IME in a week 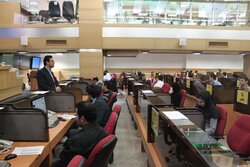 During the past Iranian calendar week (ended on Friday), 2.008 million tons of commodities worth more than $687 million were traded at Iran Mercantile Exchange (IME).

Furthermore, the IME saw trade 427,496 tons of commodities on both domestic and export pits of its oil and petrochemical trading floor valued at more than $300 million.
The exchange's customers purchased on this floor 124,800 tons of vacuum bottom, 111,910 tons of bitumen, 88,262 tons of polymeric products, 51,000 tons of lube cut, 37,021 tons of chemicals, 10,450 tons of sulfur, 4,139 tons of base oil and 90 tons of argon.
Last but not least was the IME's side market with 56,966 tons of commodities traded on it.
As previously reported, the value of trades at Iran Mercantile Exchange rose 102 percent, and the volume of trades at the exchange increased 128 percent in the past Iranian calendar year 1400 (ended on March 20), which was the highest level of growth in the history of the exchange since its establishment.