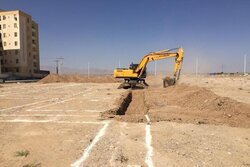 The deputy transport and urban development minister announced the definite allocation of about 980,000 land lots with residential use in the past six months for the construction of National Housing Movement units.

Mahmoud Mahmoudzadeh said that 1.4 million land lots have been also identified that their usage should be determined, or they should be added to the area, or be investigated technically by the provincial planning councils and the Supreme Council of Architecture and Urban Planning.
If the final task is determined, the land has been provided for the construction of 2.3 million housing units, he added.

According to the deputy minister, out of the four million units that are to be built in four years, 3.2 million are in urban areas and 800,000 in the rural regions.
The provided lands are the lands of the Ministry of Transport and Urban Development and so far, no land has been provided from other organizations, the official further stated.

Back in late March, Transport and Urban Development Minister Rostam Qasemi said that over 800,000 units of National Housing Movement are already under construction across the country.
Referring to the important steps taken in National Housing Movement, Qasemi said: "Important issues such as banking, land extensions, land use change and the creation of a land bank have been resolved with the support of National Land and Housing Organization."

He said that according to the information of the land bank, there are 40,000 cases in the field of land, the value of some of which is significant, noting that issues such as the law prohibiting the sale of land, which prevented access to new resources for years, were resolved.
In mid-March, the deputy transport and urban development minister announced that 5.2 million applicants had already registered in the government’s two major housing plans (National Housing Action and National Housing Movement).

Mahmoudzadeh said that according to the Supreme Housing Council, the two plans of National Housing Movement and National Housing Action were merged so that those who had already registered (in Housing Action) could enjoy the benefits of this plan (Housing Movement).
After monitoring the applicants in these two housing projects, the names will be sent to the departments of the provinces and the relevant organizations to approve the condition, and those who are eligible to go through other steps, the official explained.

The ceremony to begin the mentioned operation and also to launch some development projects in the housing sector was attended by Transport and Urban Development Minister Rostam Qasemi.
After the National Housing Action Plan (started in 2018), the National Housing Movement is the government’s second major program for providing affordable housing units to low-income classes.