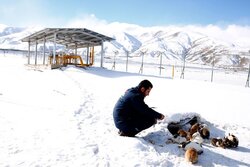 In previous years, we mostly faced interruption in gas supply during the peak consumption periods, but this year with the Oil Ministry’s good management we did not face any gas cut-off in the domestic sector,” Bahadori Jahromi said. During the previous Iranian calendar year’s cold season, despite the unprecedented increase in natural gas consumption in the country, the gas industry was able to register a record high in terms of gas supply during the peak consumption period.

The consumption of natural gas by the domestic and commercial sectors reached 662 million cubic meters (mcm) in January to register a new record high in the previous Iranian calendar year (ended on March 20).

National Iranian Gas Company (NIGC) and all its subsidiaries were seriously working a few months before the winter to ensure the sustained supply of gas during the cold season.
Having the biggest network in the region, Iran is one of the leading countries in terms of gas accessibility, and in this regard, making sure that this access stays uninterrupted during the pick consumption periods is a top priority for NIGC.