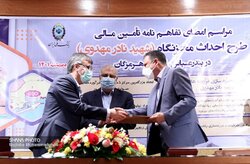 Bank Meli Iran (BMI) signed a memorandum of understanding (MOU) with the National Iranian Oil Refining and Distribution Company (NIORDC) on Tuesday to finance the construction of an oil storage facility in southern Hormozgan Province.

Held in Tehran, the signing ceremony was attended by senior officials including Oil Minister Javad Oji, NIORDC Head Jalil Salari, and BMI Managing Director Mohammadreza Farzin, Shana reported.
To become the largest petroleum products storage facility in the country, the mentioned oil storage facility which is called Shahid Mahdavi Storage is going to have the capacity to store 600 million liters of oil.
Following the construction of Shahid Soleimani Petro-refinery and Persian Gulf Mehr Refinery in Hormozgan Province and the increase in the output of oil products in the province, this storage facility is aimed at increasing the storage capacity of such products in the region.

According to Salari, increasing the capacity of the country’s petroleum products storage facilities is being seriously pursued in line with the development of refining projects in the country.
Speaking at the signing ceremony, the official mentioned the positive cooperation with BMI in other projects and said that so far, the bank has provided nearly nine billion dollars for NIORDC projects.
Referring to the ways of financing these projects, Salari said that NIORDC attracts investment for some projects by awarding them under Build-Operate-Transfer (BOT) contracts, and for some projects the company uses government resources.

“We have plans during this year to be able to sign a memorandum of understanding every month to attract financial resources that have nothing to do with government resources,” he added.
The official further mentioned the NIORDC’s underway knowledge-based projects and noted that several projects are currently under assessment and NIORDC will probably sign various MOUs in different sectors including software development and smartening of operation in the coming months.
“I hope that the necessary permits will be obtained sooner and the bidding process will be implemented, and finally we will be able to follow the projects one by one,” Salari added.