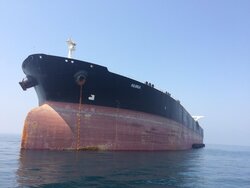 Hojjatollah Abdolmaleki, the minister of cooperatives, labor, and social welfare, has praised the performance of the National Iranian Tanker Company (NITC) during a visit to the 26th International Oil, Gas, Refining and Petrochemical Exhibition of Iran (Iran Oil Show 2022).

Speaking to the press on Monday, Abdolmaleki said NITC is one of the world’s top three shipping companies active in the field of oil and oil products transportation.
The official underlined some of the achievements of the company over the past few months and noted that oil shipment by the NITC fleet has almost doubled since the new government took office in July 2021.

“The National Iranian Oil Company (NIOC) is currently facing no problem for shipping crude oil all around the world because NITC has enough capacity to meet all NIOC’s demands,” the minister said.
Abdolmaleki further noted that his ministry is going to support NITC for the domestic manufacturing of oil vessels, saying: “We support this company using the facilities provided by affiliated banks in order to build oil tankers inside the country.”

Elsewhere in his remarks, the official mentioned his ministry’s plans also for supporting knowledge-based companies and said the subsidiaries of his ministry are taking positive measures toward knowledge-based production.
Back in April, Managing Director of the National Iranian Oil Company (NIOC) Mohsen Khojasteh-Mehr had praised the significant role of the NITC in boosting the country’s oil exports during the previous Iranian calendar year (ended on March 20).

Underling the significant role of the NITC fleet in increasing the country’s exports of oil and oil products, Khojasteh-Mehr said: “This success (increased sales of oil and gas condensate) came at a time when the sanction conditions have become even stricter.”
“Oil export is the result of a long chain of activities in various sectors including exploration, development, production, and transportation and our dear colleagues at the National Iranian Oil Company have contributed greatly to realizing this goal,” Khojasteh-Mehr said.

The performance of the National Iranian Tanker Company and the round-the-clock efforts of the sailors of the company's fleet in transporting oil and oil products have been at the center of attention of the country's authorities over the past few months, as it has also been appreciated by the Oil Minister Javad Oji and other members of the cabinet.

Nearly 1.3m tons of commodities traded at IME in a week

Iran to increase supply of gas to Iraq