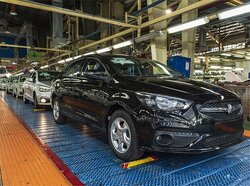 Chief Executive of SAIPA Automotive Manufacturing Group Company put the daily production of the high-quality cars at 1,800 which is unprecedented in 2010s.

Mohammad Ali Teymouri Managing Director of SAIPA Automotive Manufacturing Group Company made the remarks on Sunday and stated that the achievements obtained in production of 1,800 quality cars is unprecedented in 2010s, realizing 90 percent objectives of this giant car manufacturing company.
The company owes its success and achievements to the relentless and nonstop efforts of industrious personnel, laborers, and managers of this car production company.
Teymouri seized this opportunity to express his thanks to industrious colleagues and personnel working in different units of the company in line with boosting daily production of 1,800 high-quality cars, weekly production of 10,200 cars, and finally, realizing more than 90 percent objectives of the company.

He pointed to the defective and incomplete cars, which had been turned into a serious problem for auto manufacturers and this problem was inherited from the previous management of the company and said that this problem is on the verge of complete removal in the current management of the company, especially during the four-month period.
With the drastic measures taken in this field, the number of defective and incomplete cars which were remained in the parking lot of the company reduced from 80,000 to 26,000, showing a considerable decline.

Elsewhere in his remarks, the managing director of the company said that both daily and weekly production of car at this industrial and manufacturing unit increased after months in the current management which has been unprecedented in 2010s.
The company will make its utmost efforts to realize the current year’s motto named after by the Leader as “Production: Knowledge-based and Job-Creating”, Teymouri added.