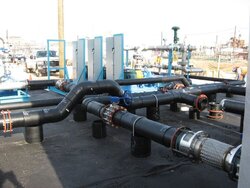 National Iranian Gas Company (NIGC) Dispatching Director Mohammadreza Jolaei has said NIGC is ready to supply between 280-300 million cubic meters (mcm) of natural gas to the country’s power plants on a daily basis during the summer.

Jolaei noted that the amount of gas supply to the power plants will be determined based on their needs, adding that currently 260 mcm of natural gas is delivered to power plants on a daily basis, Mehr News Agency reported on Sunday.
According to the official, although NIGC is prepared to supply up to 300 mcm of gas to power plants if the demand surpasses the mentioned figure the gap will be filled with liquid fuel.
Every year, the increase in electricity consumption by households in summer causes power plants to need more fuel during this peak consumption period.
Earlier in May, Head of Iran Grid Management Company (IGMC) Mostafa Rajabi Mashhadi had said that in case of a serious increase in power consumption during the summer, it will not be possible to supply power at all hours.

Over the past decade, constant temperature rising and the significant decrease in rainfalls across Iran have put the country in a hard situation regarding electricity supply during peak consumption periods.
In recent years, however, new deteriorating factors like severe drought and the decline in the country’s water resources as well as a new wave of illegal cryptocurrency mining across the country have also worsened the situation.

The ministry had also applied a 33-percent increase in electricity prices for high-consuming subscribers who would not reduce their consumption.
To manage the peak consumption period in the current year, Energy Ministry plans to cut off the electricity supply to the country’s legally operational cryptocurrency mining units if necessary.