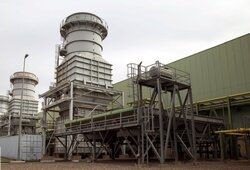 The first gas unit of Mahtab Kavir Power Plant in southeastern Kerman Province has been connected to the national grid with a capacity of 162 megawatts (MW), as the country approaches the peak summer period, IRNA reported.

According to Mahmoud Sadeqi, the Thermal Power Plants Holding Company (TPPHC)’s executive director for private power plant projects, the mentioned power plant has two gas units and a steam unit and will have a total capacity of 484 MW when completed.

He pointed out that the second gas unit of the power plant will also go operational in the near future, adding: “The commissioning of this power plant is very important for supplying electricity to the southeastern and southern provinces of Kerman, Hormozgan, and Sistan-Baluchestan and it will play an important role in compensating the electricity shortage in these areas.”
Over the past decade, constant temperature rising and the significant decrease in rainfalls across Iran have put the country in a hard situation regarding electricity supply during peak consumption periods.

In this regard, the Energy Ministry has been following new programs to meet the country’s power demand during peak periods and to prevent outages.
Constructing new units in the country’s power plants and also building new power plants for major industries are among the mentioned programs that are being pursued seriously by the ministry in collaboration with other related government entities.