Iran's export to Turkmenistan rises 38% in 3 months on year 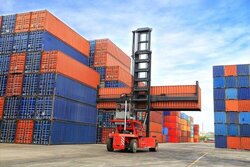 Ruhollah Latifi said that Iran exported commodities worth $95 million to Turkmenistan in the three-month period.
In mid-June a high-ranking Turkmen delegation headed by Deputy Chairman of the Cabinet of Ministers of Turkmenistan Atdayev Batyr Taganovich attended a meeting with Iranian Industry, Mining, and Trade Minister Reza Fatemi-Amin to discuss ways of expanding trade ties.
In that meeting the two sides stressed the need for the establishment of a Tehran-Ashgabat trade center.

The attendees also emphasized supporting the businessmen of the two countries in order to facilitate and accelerate trade relations and decided to form a working group to draw a one-year roadmap for future cooperation.
Welcoming the Turkmen side’s proposal for establishing a joint business center, Fatemi-Amin said: "We have established business centers in 16 countries and this is a good way to expand economic relations."

He also stressed the need to define an action plan for the two countries' trade activities to determine products and goods for import and export.
Taganovich for his part called on the Iranian government to hold joint exhibitions with Turkmen companies.

The official also suggested that an agreement be signed to increase trade relations between the two countries. He also called for the development of border markets.
At the same time, Iran’s Minister of Transport and Urban Development Rostam Qasemi met with Director-General of the Agency for Transport and Communications of Turkmenistan Chakyev Mammethan Berdimyradovich and negotiated the promotion of transport and transit ties between the two countries.