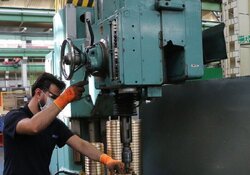 As announced by a provincial official, 23 idle production units were revived in the industrial parks and zones of Qazvin province in the first three months of the current Iranian calendar year (March 21-June 21).

Reza Saffari, the managing director of the province’s Industrial Parks Company, said these units returning to the production cycle have created jobs for over 400 persons.
As announced recently by the head of Iran Small Industries and Industrial Parks Organization (ISIPO), 211 idle industrial units have been revived in the country’s industrial parks and zones in 100 days since the beginning of current Iranian calendar year (March 21).

“We have planned to revive 1,600 idle units in the present year, which is predicted to create jobs for 28,800 persons”, Ali Rasoulian stated.
“The mentioned 211 units returning to the production cycle, our target for this year has been materialized by 13 percent”, he stated.
By reviving these units, jobs have been created for 4,481 persons, which shows that the job creation target has been martialized by 16 percent, the official added.
Rasoulian has previously announced that 2,067 idle industrial units were revived in the country’s industrial parks and zones during the previous Iranian calendar year 1400 (ended on March 20).
According to the ISIPO head, with the reviving of the mentioned units job opportunities were created for over 39,000 people.

“ISIPO had put it on the agenda to revive 2,000 stagnant units inside and outside industrial parks and zones in the previous year and by the end of the year 2,067 idle units returned to the production cycle, which provided employment for more than 39,000 people,” Rasoulian said.
The official noted that 1,433 small workshop units were also established in the mentioned year most of which were production and knowledge-based units with high technology.

The necessary licenses were also obtained for establishing 26 new industrial parks and zones across the country in the previous year, he added.
In late February, the official said that 900 consultants from the private sector and knowledge-based companies were selected in the form of industry clinics across the country to recognize the weaknesses of industrial units with the aim of reactivating stagnant units or units that are operating below capacity.

He stressed that reviving idle production units is the main approach that the government is currently following in the industry sector.
The government is seriously pursuing its programs to resolve production units' problems in collaboration with the private sector; Very good planning has been done in this regard, Rasoulian said.
He mentioned providing infrastructure and supporting small businesses and enterprises as two major programs of the Ministry of Industry, Mining and Trade in relation to industrial parks and said that 2,023 projects related to providing infrastructure for industrial parks, including water, electricity, and gas supply, with 60 trillion rials (about $215 million) of credit is underway in different parts of the country.