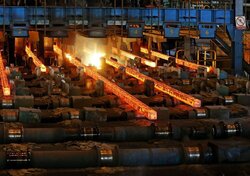 Iran has maintained its place as the world’s 10th biggest steel producer during January-June 2022, according to the latest data released by the World Steel Association (WSA).

Production of crude steel in Iran reached 13.6 million tons during the mentioned six months, registering a 10.8 percent decline year on year, the report said.
The WSA put the crude steel output by the world’s top 64 producers at about 949 million tons in the mentioned time span, 5.5 percent less than the figure for the previous year’s first half.

The U.S., Russia, South Korea, Germany, Turkey, and Brazil took fourth to ninth places, respectively.
During the first half of the current year, China’s production declined by 6.5 percent, Japan’s production fell 4.3 percent, Brazil experienced negative growth of 2.9 percent, Turkey’s output declined by 4.6 percent, and South Korea registered a negative 3.9 percent growth.
African nations produced 1.2 million tons of the commodity in June 2022, down 18.7 percent from the figure for June 2021, while Asia and Oceania countries produced 118.8 million tons, down 3.1 percent, year on year, according to the mentioned data.

The Iranian Steel industry has been constantly developing over the past years against all the pressures and obstacles created by outside forces like the U.S. sanctions and the coronavirus outbreak that has severely affected the performance of the world’s top producers.
The country is expected to climb to seventh place among the world’s top steel producers by the Iranian calendar year 1404 (March 2025).