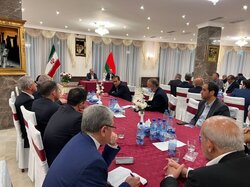 The meeting was co-chaired by Iranian Minister of Industry, Mining and Trade Reza Fatemi-Amin and Minister of Industry of the Republic of Belarus Parkhomchik Petr Aleksandrovich.
Strengthening and expanding mutual cooperation between the two countries in the fields of commerce and industry, agriculture, investment, geology and water resources, health and pharmaceuticals, and transportation, as well as the cooperation between the two sides’ chambers of commerce were among the subjects discussed in this event.
Holding the joint economic committee meeting on a regular basis, increasing the volume of bilateral exchanges, expanding the range of traded goods, increasing the share of high-tech goods with higher added value in trade, and providing equal conditions for the participation of the trade organizations of the two sides in each other's international tenders were among the agreements made in the meeting.
Establishing a roadmap for trade

Speaking at the meeting, the Iranian industry minister stressed the need for developing a roadmap for the expansion of trade relations between the two countries, stating that there are many capacities for joint investment between the two sides.
Fatemi-Amin said that the two countries should form specialized working groups to define and create and pursue the mentioned roadmap.

Mentioning Iran's capacities in various fields including oil, gas, environment, industry, and mining, the official noted: “Complementary to Iran’s capacities in various fields, Belarus also has good potential in the food industry, microelectronics, and industrial machinery.”
He stated that the two sides should see their relations as mutually beneficial, saying: “When the interests of the two countries are tied together, multilateral opportunities will be created. Therefore, a road map must be drawn for the development of interactions.”
Iran to dispatch commercial attaché to Minsk soon
After the joint economic committee meeting, Fatemi-Amin attended a meeting with Iranian traders and businessmen working in Belarus to discuss the challenges and opportunities of trade with the East European country.

In this gathering, the minister stressed the importance of establishing an Association of Iranian traders in Belarus and announced that soon a commercial attaché will be stationed in Minsk.
He underlined the importance of the experiences that the businessmen working in Belarus have gained over the years and said: “Safeguarding investments and businesses of Iranians in Belarus, presence in Eurasian Economic Union and Iran's membership in the union are among the important issues that we have been focusing on in our interactions with Belarusian government officials.”
“The two countries’ economic development and transit of goods through Belarus are also among the important issues being followed up,” Fatemi-Amin said.

He further mentioned the plans for joint cooperation between Iranian mining companies and Belarusian heavy and semi-heavy machinery manufacturing companies for joint production of mining machinery.
Iran-Belarus trade exchanges to be 10-folded
The spokesman of the Iranian Industry, Mining, and Trade Ministry also announced on Thursday that Iran and Belarus plan to increase their mutual trade first by 10 times in the near future and then by 20 times in the long term.

Omid Qalibaf said in line with the Iranian government’s dynamic trade diplomacy, the ministry has prepared a detailed roadmap for increasing bilateral trade ties between the two countries.
He noted that the important point of focus in Iran's bilateral trade with Belarus is exporting knowledge-based companies’ medical facilities to the country.
According to the official, the government has targeted exporting five million dollars of such equipment to Belarus annually.
The 14th Iran-Belarus joint economic commission was held in Tehran five years ago.