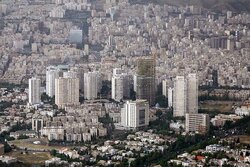 Average housing price rose 8.3 percent in the capital Tehran during the fourth Iranian calendar month Tir (ended on July 22), compared to its previous month, according to a report by Statistical Center of Iran (SCI).

Based on the SCI data, the average price for one square meter of a residential unit in Tehran stood at 448 million rials (about $1,611) during the mentioned month.
The average housing price in the said month also increased 27.1 percent in comparison to the same month in the previous year.
As reported, the number of real estate deals stood at 8,685 in the capital city in the fourth month of this year.

As previously reported by Central Bank of Iran (CBI), the average housing price rose 16 percent in the capital Tehran during the last month of the past Iranian calendar year 1400 (ended on March 20), compared to the same month in the preceding year.
Based on the CBI data, the average price for one square meter of a residential unit in Tehran stood at 351.2 million rials (about $1,263) during the last month of the past year, up 6.2 from its previous month, and 16 percent from the same month of the preceding year.
Housing prices in Iran have been constantly rising over the past three years due to various internal and external factors.

Although, in early May, the chairman of Real Estate Agencies Union said, “This year is the year of lower housing prices; this condition will continue in the country for the next two years, and we will see a continuous decrease in housing prices”.

Mostafa Qoli Khosravi referred to a report released by Central Bank of Iran in terms of housing price in the first Iranian calendar month Farvardin (ended on April 20), and said: "The government is trying to compensate the housing shortage in the country with the National Housing Movement plan, and this plan is being prepared and implemented in several urban and rural areas”.
He said that there is currently shortage of about 720,000 housing units in the country, adding: "Every year, dilapidated apartments are added to this number, therefore, the current government intends to compensate for the housing deficit by recognizing this shortage and implementation of National Housing Movement.”

The market will react positively to the increase in supply, and the completion of the government plans including Mehr Housing and National Housing will control the uncontrolled growth of housing prices, he further predicted.
In early June, transport and urban development minister said that 1.35 million units of National Housing Movement are currently under construction throughout the country and the number is increasing every day.

National Housing Movement to construct four million housing units in four years is one of the major plans of the current government in the housing sector.
According to the plan, out of these four million residential units, 3.2 million units will be constructed in cities and 800,000 units in villages, some of these units are currently being constructed after providing lands and preparing the necessary conditions.
The deputy transport and urban development minister has recently announced that the first phase of National Housing Movement will be inaugurated in the next Iranian calendar month Shahrivar (begins on August 23).

Mahmoud Mahmoudzadeh made the remarks while also announcing the supply of 90 percent of the required land.
Based on the planning, in the first stage, about 100,000 units will be delivered to the people who participated in the project earlier and deposited their initial contribution, he stated.
The projects will be inaugurated in many provinces including Yazd, Kerman, and South Khorasan, the official said.