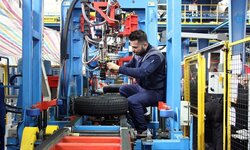 This number of produced tires weighed over 62,494 tons, with a two-percent drop year on year.
According to the statistics, in the mentioned period, 39,083 tons of passenger car tires were produced, showing a six-percent rise year on year.
Meanwhile, 5,620 tons of van tires were produced, indicating an 18-percent fall, and 12,056 tons of truck and bus tires were produced, showing a 10-percent drop.
Production of the tires of agricultural vehicles experienced a decline of 12 percent to stand at 4,835 tons, and that of the road building and industrial vehicles fell 20 percent to 900 tons in the period under review.
In the first three months of the present year, 4,392 tons of bicycle and motorcycle tires were also produced.

Iranian tire manufacturers produced 47,624,426 vehicle tires in the past Iranian calendar year 1400 (ended on March 20), which was one percent more than the figure of its preceding year.
This number of produced tires weighed over 288,149 tons, with a four-percent drop year on year.
As reported, 24,179,708 car tires weighting 259,096 tons were produced in the past year, with four percent drop in number, and five percent fall in weight as compared to its preceding year.
In the previous year, 152,251 tons of passenger car tires were produced, showing a five-percent fall year on year.

The tire industry has a 60-year history in Iran. Currently, 11 tire manufacturing companies are active across the country that produce tires for passenger cars, trucks, buses, vans, road construction, and agriculture machinery, as well as bicycles and motorcycles in addition to other types of tubes.
Some15,000 people are directly employed in this industry and more than 250,000 people are indirectly involved in the value chain of this industry.
The Iranian tire industry, despite the continuation of sanctions and the coronavirus pandemic conditions, as well as some domestic restrictions, has been following a thriving and successful path over the past few years.

In addition to the successes achieved in terms of the output amount, Iranian tire manufacturers have entered new areas including production of the wide-base tires and the tires of SUVs.
Wide base tires, which are a new generation of heavy vehicles’ tires, have been produced for the first time in West Asia by Iranian producers.