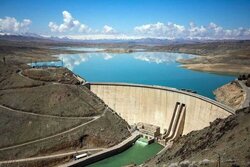 Water inflow to Iran’s dams has increased by five percent since the beginning of the current water year (September 23, 2021) up to the end of July, compared to the same period last year, the new report released by the Water Resources Management Company shows.

According to the said report, during the mentioned period, 29.16 billion cubic meters of water entered the country’s dam reserves, while the figure stood at 27,86 billion last year, IRNA reported.
Despite the increase in water inflow, the total volume of water in dam reservoirs has experienced a 46 percent decrease compared to the previous year, because the increase in the inflow to the dams is mostly due to the recent heavy rainfalls across the country.
Recent rains have led to the melting of snow cover, increasing the level of water behind dams.