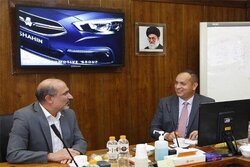 Turning to the significance of car manufacturing industry, Teimouri stated that car-manufacturing industry is one of the very important industries in any country which plays a leading role in creation of sustainable development and affects other important industries of the country.
Given the above issue, SAIPA Automotive Group is ready cooperate with the Bolivarian country of Venezuela jointly and export its high quality cars to this Latin American country, CEO of SAIPA Automotive Group emphasized.

Venezuelan minister of transport, for his part, appreciated performance of SAIPA Automotive Group and said, “In my visit to SAIPA Automotive Group’s Research and Innovation Center, I saw some new model of cars which would soon enter SAIPA’s production line, so that the Group’s new cars are modern and up-to-date cars, observing requirements of international standards.”
Stating that SAIPA Automotive Group is flagbearer of car manufacturing in the Islamic Republic of Iran, Ramón Velásquez pointed out that the Group plays a leading effective and important role in Iran in line with offering quality services to the people of the country and development of new and modern technologies in Iran.

SAIPA Automotive Group has made significant progress and growth in the field of technology which is very valuable, he said, adding, “It is hoped that we would be able to revive cooperation with SAIPA Automotive Group in setting up the Group’s factory in Venezuela again.”
Elsewhere in his remarks, he pointed to a joint factory set up between Iran and Venezuela in this country as joint venture and said, “Presently, this jointly-founded factory is inactive and we are ready to make our utmost effort to reactivate the factory.”

Based on the planning made in this regard, Venezuela will need 10,000 sets of cars which would be purchased from SAIPA Automotive Group, he said, adding that these cars would export to Venezuela in two forms of CKD (Completely knocked-down) and CBU (Completely Built Unit).”
The parts of these cars would be assembled in Venezuela and would hit the car market of this country, the Venezuelan transport minister added.

Under such circumstances, products of SAIPA Automotive Group would export to other countries of the region, he continued.
This amicable relation between Iran and Venezuela can help boom automotive industry of Venezuela and would also help industrialization of this country.
Prior to this meeting, the visiting Venezuelan Minister of Transport and accompanying delegation visited the Research and Innovation Center of SAIPA Automotive Group and were briefed on the latest achievements of the Group in manufacturing new products.