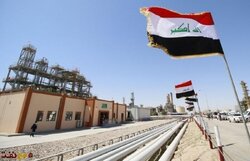 The chairman of Iran-Iraq Joint Chamber of Commerce said that Iraq tries to increase import of gas from Iran.

Yahya Al-e Es'haq made the remarks while mentioning the economic relations between the two neighbors as strategic.
Referring to Iran’s high gas reserves in the world, he considered the export of gas to Iraq very advantageous for both countries from the economic point of view and the short transportation distance.

Back in mid-June, Iranian Oil Minister Javad Oji had announced that Iran has received $1.6 billion from Iraq to settle part of the debts it has sought from its neighbor since 2020 for the supply of gas.
"Fortunately, with active energy diplomacy and after months of negotiations, $1.6 billion in arrears for gas exports to Iraq was received”, the minister announced in a Twitter post at the time.
Given Iraq's need for natural gas for consumption in power plants, negotiations on importing Iranian gas were started in late 2010 while a contract for gas sales to Baghdad was sealed in June 2013.

The two countries also inked the agreement for the deployment of natural gas to Basra in October 2015, but the exports were halted due to payment issues.
Later on, the Iraqi government approved a deal in late 2017 to import gas from Iran to the eastern border province of Diyala, increasing purchases of the Iranian fuel, which were resumed in June 2017 after several years of hiatus.
Back in early April, Iraq’s Acting Electricity Minister Adel Karim had said his country is in need of gas import from Iran the coming years.